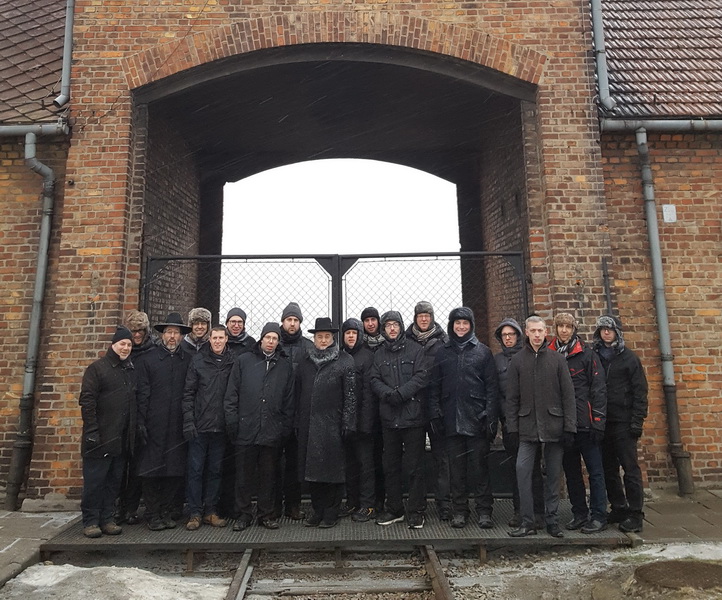 In an emotionally charged trip, members of Ohr Chodosh shul recently completed a two day trip to Poland led by Rabbis Shimshon Silkin and Yonason Roodyn from Klal Chazon, and accompanied by the kehilla’s Rov, Dayan Menachem Gelley and his Rebbetzin.

The group began their visit at the beautiful shul of the Chozeh of Lublin in Lancut. Despite being set ablaze during the second World War and for some of the time being used to store grain, most of the Shul remained intact .One of the artefacts shown to the group were a number of burned out sefer Torah parchments, a poignant reminder of the statement of Rabi Chanina ben Tradyon: “the parchment may burn but the letters fly up to Heaven”.

The group then journeyed to Lizhensk to visit the burial place of the Noam Elimelech. In order to fully appreciate who he was and the context within which he lived, Rabbi Silkin gave the group an introduction to Chassidus and the profound effect it had on the Jewish world. Rabbi Roodyn related how the Rebbe, Reb Elimelech and his brother Reb Zusha travelled from place to place to spread Chassidus, and each place they stayed in overnight became a centre for Torah learning in future generations. However when they came to Auschwitz, they felt they could not stay overnight, a clear premonition of the horrors that were to come future generations later. With a heightened appreciation of Reb Elimelech and chassidus generally, everyone spent precious time davening with great intensity at his grave – a place well known for prayers to be answered.

The group next travelled to Zbilatowska Gora, a cold, dark forest on the outskirts of Tarnow where they visited a mass grave of some 800 infants. As part of the Nazis’ statistic cruelty, amid huge commotion and pandemonium these children were snatched from their mothers and thrown into a mass grave and shot. Eye witness accounts say the ground moved for three days afterwards. Rabbi Silkin shared some heart felt words and Kaddish was said before silence then enveloped the group as each contemplated how precious their own children are and how much they each have to be grateful for.

The trip then continued on to Krakow and the Ghetto where Rabbi Rooydn vividly bought to life how the Jews lived after the Ghetto was established. He explained how for example 27 people were cramped into a house designed for just three. With chronic malnutrition, children risked their lives to bring staple foods to their families from outside the Ghetto. He portrayed what happened when the Jews were rounded up to be taken to death camps and why the Central Plaza was filled with an arrangement of chairs as a lasting monument to them.

The next day started with a special Shacharis at the Rema’s Shul. This Shul uniquely forms part of land that also contains the Beis Hakevoros where he and his family are buried. After Shacharis they davened at the Rema’s burial place. Important historical and background information about his astonishing greatness was described. One example was that when, despite completing his own encyclopaedic code of Jewish law, he found out about a similar version that had just been completed by Rav Yosef Caro – the Beis Yosef, displaying enormous humility, adjusted his commentary, merely adding notes and observations to Rav Yosef Caro’s work, thereby creating one body of Halacha for Ashkenaski and Sephardic Jewry for all time. Amongst other tzaddikim buried there were the Tosfos Yom Tov, the Bach and the Megaleh Amukos, each of whom was introduced and elaborated upon by the Rabbonim. Dayan Gelley supplied relevant insights to the Gedolim’s lives and the time period within which they lived.

The group then travelled to the harrowing site of Auschwitz. Entering Auschwitz the stark reality of the destruction of European Jewry was bought to bare bear. As they went from exhibit to exhibit, the sheer enormity of murder on an industrial scale became quickly apparent. Whilst walking around, the Rabbonim provided explanations to many of the artefacts, interspersed with Divrei Torah that put the Holocaust into its proper Torah perspective. They group spent much time walking around the barracks in Auschwitz Two – Birkenau, viewing the crematoria, cattle cars, trainlines and watch towers. They learnt, for example, how the Nazis knew the gas had done its job when the screaming had stopped, and how in desperation the inmates vainly tried to scratch their way out of the gas chambers. However, emerging from Auschwitz, the Dayan taught that whilst it is crucial to remember the details of the Holocaust , and how so many died Al al Kiddush Hashem, we as Jews have to focus on the future, and live our own lives al Kiddush Hashem.

The tour finished by visiting the original Beis Yaakov school founded by Sorah Schnierer. Again the Dayan pointed out the power of one individual, certainly one of the greatest Jewish women of the 20th Century, who recognised a problem and went about rectifying it, ultimately saving girls from total assimilation. The brief trip ended on a positive note as Rabbi Silkin quoted from the introduction of Reb Yaakov Emden’s siddur, that the greatest evidence for Hashem is the continued existence of the Jewish people who have survived against all odds, despite persecution over the millennia. The trip was a resounding success, with future excursions already in the planning.